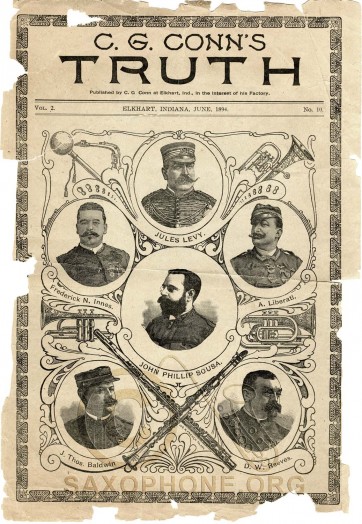 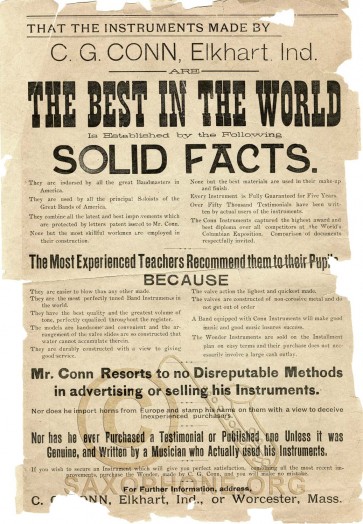 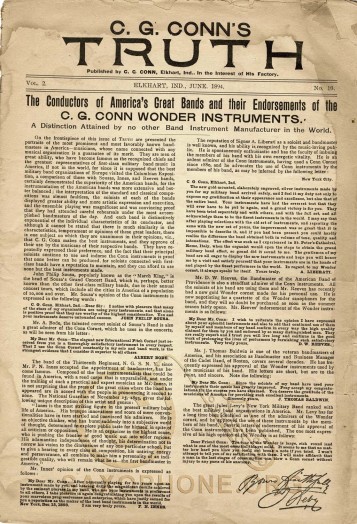 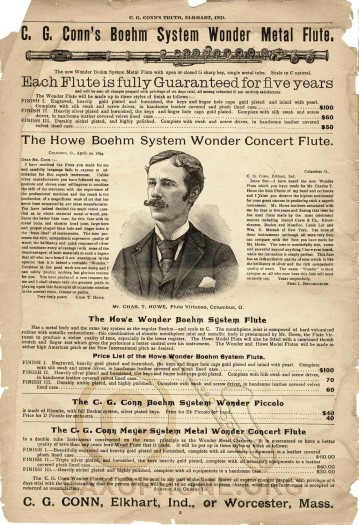 Published by C.G. Conn at Elkhart, Ind., in the interest of his Factory

That the Instruments Made By C.G. Conn, Elkhart Ind. are the best in the world is established by the following solid facts.

The Most Experienced Teachers Recommend them to their Pupils.

Mr. Conn Resorts to no Disreputable Methods in advertising or selling his Instruments.

Nor has he ever Purchased a Testimonial or Published one Unless it was Genuine, and Written by a Musician who Actually used his Instruments.

The Conductors of America's Great Bands and their Endorsements of the C. G. CONN WONDER INSTRUMENTS.- A Distinction Attained by no other Band Instrument Manufacturer in the World.

On the frontispiece of this issue of TRUTH are presented the portraits of the most prominent and most favorably known bandmasters in America--musicians, whose name connected with any musical organization is a guarantee of its merit. They are men of great ability, who have become famous as the recognized chiefs and the greatest representatives of first-class military band music in America, if not in the world, for since it is supposed that the best military band organizations of Europe visited the Columbian Exposition, a comparison of those with Sousas, Innes, and Reeves bands, certainly demonstrated the superiority of the American bands, for the instrumentation of the American bands was more extensive and better balanced ; the interpretation of the standard and classical compositions was almost faultless, the soloists of each of the bands displayed greater ability and more artistic expression and execution, and the ensemble playing was magnificent and was convincing proof that they had attended careful rehearsals under the most accomplished bandmasters of the day. And each band is distinctively exponential of the individual characteristics of its conductor, and although it cannot be stated that there is much similarity in the characteristics, temperament or opinions of these great leaders, there is one subject on which they are unanimous in their opinions, viz., that C. G. Conn makes the best instruments, and they approve of their use by the musicans of their respective bands. They have repeatedly expressed their preference, and the fact that their principal soloists continue to use and indorse the Conn instruments is proof that none better can be produced, for soloists connected with first-class bands have a reputation to maintain, and they can afford to use none but the best instruments made.

John Philip Sousa, popularly known as the g‘ March King, is the head of Sousa's Grand Concert Band, which is, perhaps, better known than the other first-class military bands, due to their annual concert tours, which include all the cities in America of a population of zo,000 and over. Mr, Sousa's opinion of the Conn instruments is expressed in the following words :
C. G. Conn, Elkhart, Ind.—Dear Sir : I notice with pleasure that many of the stars of my organization are using your instruments, and that alone is positive proof that they are worthy of the highest consideration. You and
your instruments deserve unbounded success.    JOHN PHILIP SOUSA.

Mr. A. Bode, the talented cornet soloist of Sousa's Band is also a great admirer of the Conn Cornet, which he uses in the concerts, as will be seen from his letter : My Dear Mr. Conn—The elegant new International Pitch Cornet just received from you is a thoroughly satisfactory instrument in every respect. That I use the Conn Cornet constantly in my solo and band work, is the strongest evidence that I consider it superior to all others.    ALBERT BODE.

The band of the Thirteenth Regiment, N. G. S. N. Y., since Mr. F. N. Innes accepted the appointment of bandmaster, has become famous. Composed of the best instrumentalists that could be found in America, with a reed corps that is unparalleled, and under the training of such a practical and expert musician as Mr. Innes, it is not surprising that the press of the great cities where the band has appeared are in accord with the people in pronouncing it second to none. The National Guardian of November 15, 1893, gives the following unique description of this artist and genius :

Innes is the most striking figure in the present military band life of America. His brusque innovations and scorn of mere conventionalities have in turn startled and convinced his admirers. He is an objective thinker, who has burst suddenly into a subjective world of thought, determined to explore public taste for himself in spite of all criticism or opposition.    He is an organizer in the highest sense, who is pushing the frontier of good music out into wider regions. His adamantine independence of thought, his determination not to narrow his vision to the dimensions of any one particular school, but to give a hearing to every class of composition, his untiring energy and perseverance, all combine to make him a personality of an indigestible quality, who will remain what he is--the first bandmaster in America. Mr. Innes' opinion of the Conn instruments is expressed as follows : My Dear Mr. Conn :—After personally playing for ten years upon an instrument made by you, and hearing daily the magnificent results achieved by the eminent players in my band, who use your instruments in preference to all others, I take pleasure in again congratulating you upon the results of your marvelous progressiveness and enterprise, which have justly earned for you a reputation as the maker of the best band instruments in the world, New York, Dec. 15, 1893.    I am very truly yours,    I'. N. INNES.

The reputation of Signor A. Liberati as a soloist and bandmaster is well known, and his ability is recognized by the music-loving public, He is spontaneously enthusiastic and has the faculty of imbuing the members of his band with his own energetic vitality. He is an ardent admirer of the Conn instruments, having used a Conn Cornet since 188o, and he advocates the use of Conn instruments by the members of his band, as may be inferred by the following letter :

New York City. C. G. Conn, Elkhart, Ind.
The new gold-mounted, elaborately engraved, silver instruments made by you for my military band arrived safely, and I feel it my duty not only to express my gratification at their appearance and excellence, but also that of the entire band. Your instruments have had the severest test that they will ever have to be put to again, and a grand victory is for you. They have been tried separately and with others, and with the full set, and all acknowledge them to be the finest instruments in the world. I may say that after playing selections with the old set of instruments, and repeatingg the same with the new set of yours, the improvement was so great that it is impossible to describe it, and if you had been present you could hardly realize the difference the band obtained both in volume of tone, quality and intonations. The effect was such as I experienced in St. Peter's Cathedral, Rome, Italy, when the organist would open the stops to obtain the grand military band effect, so grand did it sound to me. The gentlemen of my band are all eager to display the new instruments and bore you will honor me by a visit and satisfy yourself that your instruments are in the hands of and played by the finest performers in the world. In regard to my Wonder
cornet, it always speaks for itself. Yours truly,    A. LIBERATI.

Mr. D. W. Reeves, the Bandmaster of the American Band of Providence is also a steadfast admirer of the Conn instruments. All the soloists of his band are using them and Mr. Reeves has recently had a new gold Wonder cornet made for his personal use. He is now negotiating for a quartette of the Wonder saxophones for the band, and they will no doubt be purchased as soon as the summer season fairly opens. Mr. Reeves' indorsement of the Wonder instruments is as follows: My Dear Mr. Conn: I wish to reiterate the opinion I have expressed about your splendid instruments and also to add that continued use of them by myself and members of my band confirm in every way the high quality claimed for them by yon and endorsed by so many distinguished men. They are really superb and I trust you will live long and continue in the good work of prolonging the lives of performers by furnishing such satisfactory
instruments. Very truly yours,    D. W. REEVES.    Li

Mr. J. Thomas Baldwin is one of the veteran bandmasters of America, and his association as Bandmaster and Business Manager of the Cadet Band, of Boston, covers several decades. He has frequently expressed his approval of the Wonder instruments used by the musicians of his band. His letters are short, but are to the point, and sincere. Note the following: My Dear Mr. Conn: Since the soloists of my band have used your instruments their music has greatly improved, Pray accept my congratulations for the success you have attained. You deserve the gratitude of the musicians of America for providing such excellent instruments.
Sincerely yours,    J. THOMAS BALDWIN.

The great Jules Levy's New York Military Band ranked with the best military band organizations in America. Mr. Levy has for a long time been identified as one of the admirers of the Wonder cornet, and he approved the use of these instruments by the members of his band. Several letters of indorsement of his approval of the Conn instruments have been published. The one most expressive of his high opinion of the Wonder is as follows: Dear Friend Conn: The tone of the Wonder is large, rich round (and what is one of the most essential things) solid. It seems to me that no matter how hard you blow you could not break a note if you tried. I won't attempt to tell you of my satisfaction with them. I will make affidavit that a man in the last stages of consumption can blow a Conn cornet without

Each Flute is fully Guaranteed for five years.

contributed by saxquest.com and the Saxquest Museum. Reprinted here with written permission from Conn-Selmer Inc.