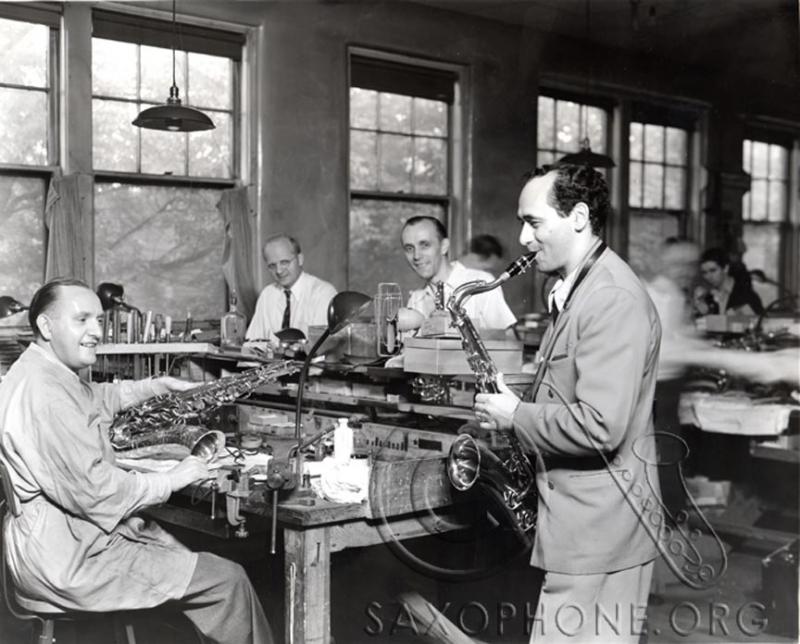 The Selmer-U.S. Padless Saxophone was the brainchild of musical instrument technician and inventor, Eugene Sander. As foreman of the saxophone department of H. & A. Selmer, Mr. Sander began researching the idea of a padless saxophone in 1938. After two years of R & D, a US patent was issued on December 30, 1940. By January of 1941 twelve working models had been manufactured with full production slated to begin in February. Production of this new model was cut short by WWII and the war effort as a Military Ordinance required that all instrument manufacturing be ceased in leu of war time production. Sadly, it was never revived after the war and the padless saxophone drifted off into the sunset of history.

Born in Germany in 1890, Mr. Sander came to American at the age of two with his family and began a career in the musical instrument production trade in 1907. Despite coming from a musical family, Mr. Sander was the only sibling of six not to learn to play an instrument.

The Selmer-U.S. Padless Saxophone operates under the same principles as a regular saxophone except that the “pad” is replaced by a flat metal plate and the edge of the tone hole is replaced by a tone ring. To make this work, each tone hole is surrounded by a socket. Soft, resilient "Tonex Tone Rings" are mounted in these sockets. Click on the photo to the left to clearly see the tone rings mounted in each tone hole. These tone rings are composed of three layers of differing synthetic materials that are blended togther to give the saxophone a solid feel when set up properly. The center layer is an air tight, water-resistant layer. Selmer claims to have tested over 300 different materials before settling on the final tone ring composition. A solid metal "Tone Booster" key plate closes on the tone ring in quite the opposite manner of how a traditional saxophone operates. Thus, a seal is made which is effectively the same as a traditional saxophone except here the entire pad cup is essentially one giant resonator. In this sense, the instrument was billed as having “twice” the volume, as being 120% more air tight, as having greater resonance and more brilliant tones, and as having a more defined articulation between the notes.

These claims were not just made haphazardly. Selmer actually went to the trouble of hiring an independent firm to run tests on the new instrument. Below is a quote from the actual press release from Selmer dated December of 1940. Click the following links to see the test results and just how seriously they took these claims:

"In a unique series of tests, just completed, a sound analysis has been made comparing the tone produced on one of the new Selmer-U. S. Padless Saxophones with that of a conventional padded instru­ment. In charge of the tests was a noted consulting engineer and lecturer at a famous university. The instruments were played by Merle Johnston, famous New York teacher and player. Equipment used included sound analyzer, sound level meter, cathode ray oscillo­scope, audio-frequency level recording machine and equipment for photographing wave form.

The report comparing test results on the padless saxophone and a fine padded saxophone of conventional type states that there is "a decided improvement in richness of timbre and brightness of tone" on the part of the new Selmer-U. S. instrument. It was also found that the padless sax "produces considerably greater sound output with the same playing effort".

The report concludes that the analysis made indicated that "the elimination of soft kid pads in the improved Selmer Saxophone definitely enhances the more desirable partials (overtones) and diminishes the undesirable partials, and, therefore provides a richer, brighter, more pleasing tone."

This project was a collaboration between H. & A. Selmer and the Buescher Musical Instrument Company. It was a similar to the arrangement that H. & A. Selmer had with Selmer Paris, except in this instance, H. & A. Selmer was responsible for the design. Accordingly, the research, design, and patent expenses, as well as full assembly and quality control were all Selmer. However, the actual manufacturing of parts (body tube, bow, bell, neck, rods, key work, etc…) was all done by Buescher. Selmer designed and installed the “Tonex” tone rings. Selmer was also responsible for all marketing and distribution.

The instrument was hailed as the first major innovation in saxophone design in 100 years, since its invention by Adolphe Sax. 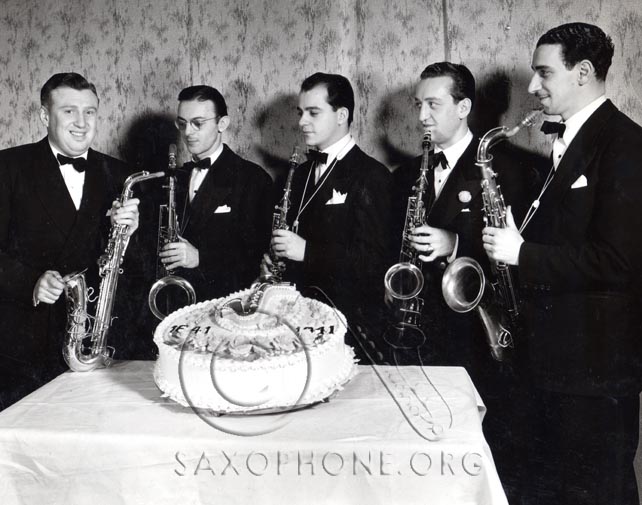 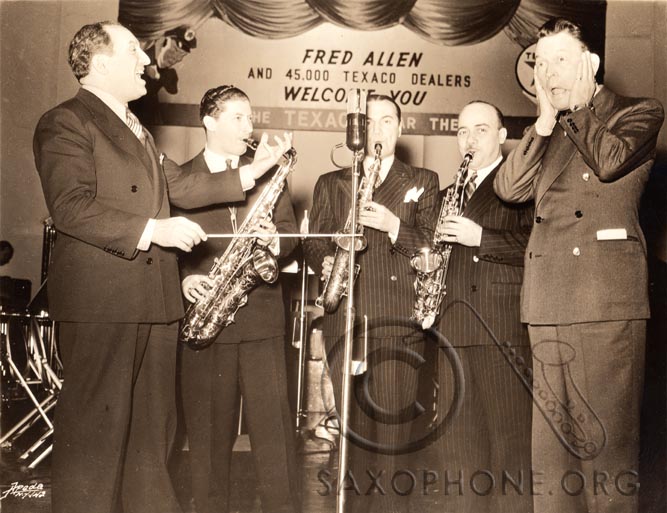 Left Photo Above: To commemorate the saxophones 100th anniversary - Richard Himber and the saxophone section of his famous Studebaker Champions Orchestra were presented with a giant cake on which reposed a saxophone frosting design. And just to make the presentation scene truly memorable, Himber (at left) posed with the newest sax - a recently patented Selmer-U. S. Padless Saxophone, said to incorporate the first fundamental improvement in that in­strument's construction since its invention.

Middle Photo Above: Bus Bassey, featured tenor sax man with Artie Shaw, enjoys the distinction of owning the first "padless" saxophone sold anywhere in the United States. Bassey got the drop on other players by refusing to leave the Lockie Music Exchange, Los Angeles, until a demo model sent to the West Coast for final tests was sold to him.

Right Photo Above: Conducted by Al Goodman, a sax section composed of Murray Cohan, Artie Manners and Andy Sannella give Fred Allen a demonstration of the power and richness of tone that comes from the new Selmer-U.S. Padless Saxophone after the Texaco Broadcast from CBS Studios in New York in March of 1941. The Fred Allen Texaco Star Theatre was heard Wednesday evenings, Columbia Network. 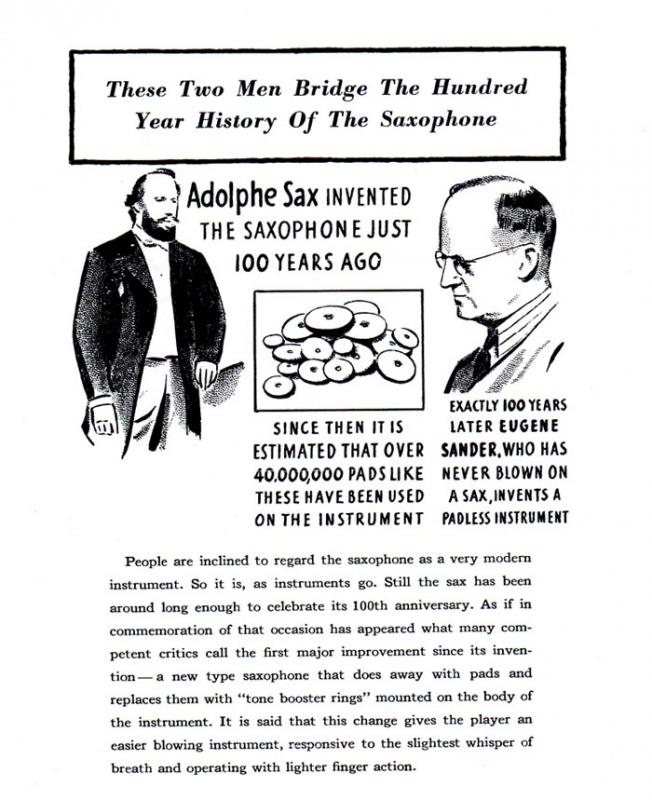 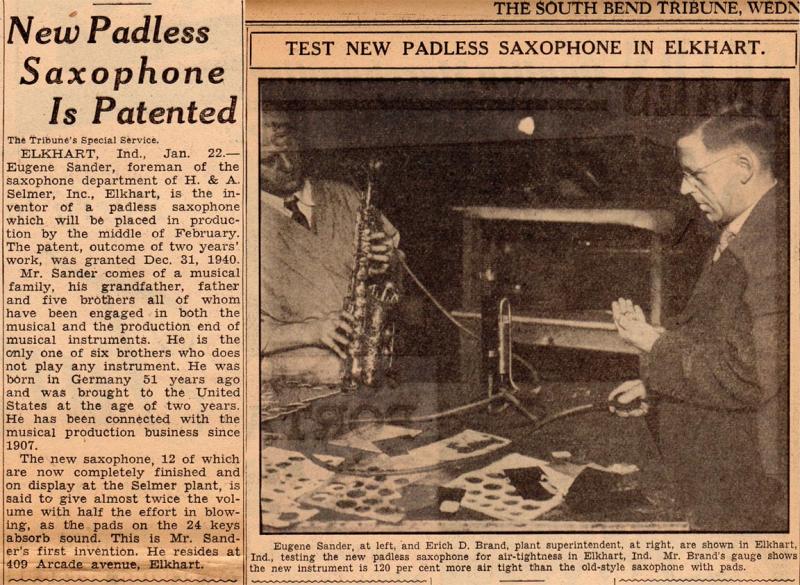 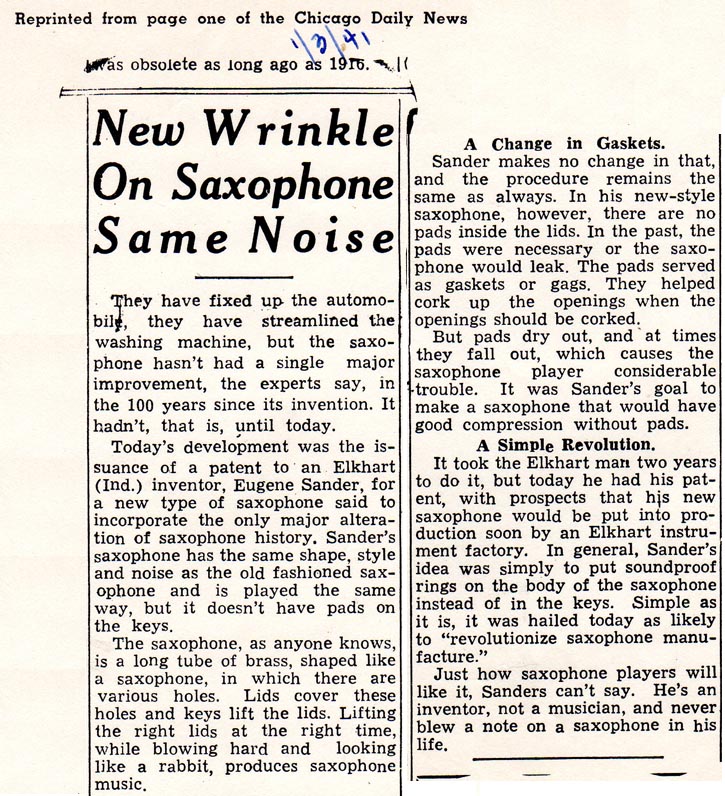