Extremely RARE and important primary source letter unearthed from Buescher dated Sept 26, 1893. Just about every Internet source I can find states Fall of 1894 as the year Buescher left Conn. However, its clear from this document that he actually resigned Conn in the fall of 1893 NOT 1894.

Its amazing to me to see Buescher going directly after Conn so forcefully so early after his departure from Conn. This to me indicates that there was certainly no love-loss between he and Conn. I can only image that Conn, with his ego, was extremely difficult to work for, especially for someone as skilled and resourceful as Gus Buescher. It also shows that he must have had some money-people backing him very early on as it appears his shop was fully equipped with the latest and best machinery and tools for musical instrument production practically the day he walked from Conn. In fact, I wouldn't be surprised if some of Elkhart's businessmen who despised Conn for both political and other economic reasons (such as John Fieldhouse and/or Andrew Hubble Beardsley) may have put him up to leaving Conn in the first place and may have even helped initially fund his operation too, perhaps out of spite. It would have taken at least a year or two to set up a shop for full scale musical instrument production. Although, Buescher began a home shop as early as 1888, he was only publicly producing products like band emblems, bicycle pedals and other metal goods. But Its obvious that more was going on behind closed doors and that he was very careful in planning his departure from Conn, keeping his real intentions secret.

I would love to have seen Conn's reaction upon first reading this letter. It must have sent him ballistic!! Its a page right out of his own book. 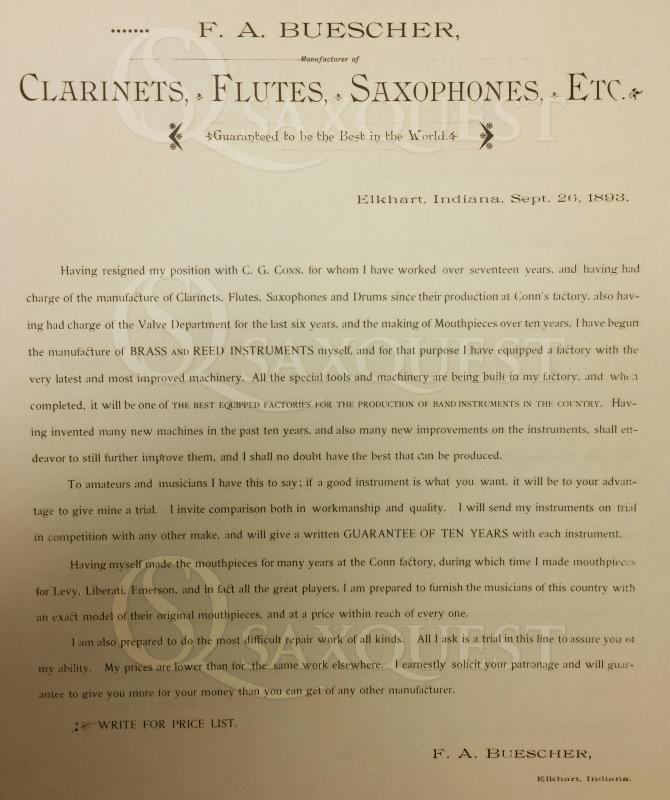